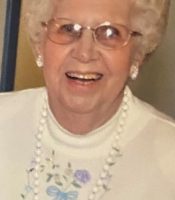 Due to the current health crisis, funeral services will be private.

Born October 4, 1921 in Lake Ariel, she was the daughter of the late Hiram and Florence Owen Frisbie. She was a graduate of Lake Consolidated School. Prior to retirement, she worked in production at Gertrude Hawk Chocolates. She was the oldest living member of the Cortez United Methodist Church. She was an auxiliary member of the Thomas A. Snook VFW Post 6520 in Cortez.

Preceded in death by a son Leroy Black; a sister Gertrude Shaffer; and brothers John and George Frisbie.

The family wishes to express their most sincere gratitude and appreciation to the nursing staff at St. Mary’s Villa for their compassionate care for her in her time of need.

Due to the current health crisis, funeral services will be private.

In lieu of flowers, the family encourages memorial contributions in Ruth’s name be made to the Thomas A. Snook VFW Post 6520 Auxiliary, 837 Cortez Road, Jefferson Twp. Pa 18436.

To share a memory or the express your condolence to the family please visit www.jameswilsonfuneralhome.com