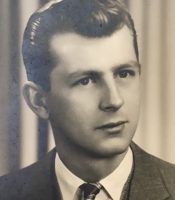 Due to the COVID19 pandemic, services and interment will be private and at the convenience of the family.

Born in Archbald, son of the late John, Sr. and Olga Dorash Schott, he was one of 18 children. He attended S. Canaan Elementary School and graduated from Waymart High School. He worked for a short time at Aldenville Wood Products, Hussco Shoe Co. and S.J. Bailey Furniture Company in Honesdale. He enlisted in the U.S. Air Force in 1955 and was honorably discharged in 1962 following 7 years of service. He received a bachelor’s degree Rollins College, Orlando, FL in 1966.

From 1967 through 1970 he worked as a systems engineer at Cape Canaveral, FL. His talents were defined to assist in developing launch mission rules for all of the Apollo Missions. He participated in the most exciting and challenging phase of America’s Space Program, the Lunar Landing of July 1969.

In his early years he was a member of the rollerskating dance team in Honesdale. Joseph married Anna Schroeder a resident of Trier, Germany. Their marriage was blessed with a daughter Elizabeth.

Joseph retired in 1994 and relocated from Florida to Seelyville, Wayne County, PA.

Joseph’s hobbies included building anything requiring technical abilities. His scientific thoughts were forever at the forefront of his mind.

In his retirement years, he was inspired to author a book “A Spirit of Hope”, defining a spiritual experience which he encountered as a child.

Growing up in a large family taught Joseph responsibility at any early age. He was “in a learning mode” at all times and always had a story to tell, even while enduring illness.

He loved his country and served it with honor. Joseph’s life displayed kindness and generosity in reaching out to others. Truly a devoted and loving husband, father, grandfather, brother, uncle, and true friend never to be forgotten. Joseph and Anna were congregants of St. John the Evangelist Church, Honesdale and later St. Mary’s Church, Waymart.

He is survived by his wife Anna whom he met at an officer’s club dance in Germany; daughter Elizabeth Cominio; grandchildren Alyson, Joshua, and Christina Cominio; siblings Nancy Piercy, who so lovingly and caringly crafted this obituary, and her husband George of Seelyville, Barbara Cavage and her husband Andrew of Waymart, William and his wife Mary of Rockport, TX, and Patrick of Gulfport, MS; numerous nieces, nephews, and cousins.

The Family wishes to thank Ken Bannon, PA,  the staffs at Wayne Memorial Hospital and Carbondale Nursing Home and all caregivers for their compassionate and comforting care during his illness.

Due to the COVID19 pandemic, services and interment will be private and at the convenience of the family.