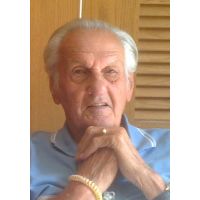 James W. Robinson of Hamlin, passed away Friday night at the age of 91 at St. Mary’s Villa surrounded by his family. His wife of 52 years was the former Marian Butler who  passed away in 2011.

Born in Dunmore, he was the son of the late William R. and Florence Wert Robinson. He was a member of the Centenary United Methodist Church, Hamlin. Prior to his retirement, James was employed by Nivert Metal Supply, Throop. He was a United States Army World War II veteran serving in Europe. He went on to work in Okinawa on the reconstruction effort.

Jim was a devoted husband, father, grandfather and great grandfather. He enjoyed every minute he spent with his family. One of his hobbies was woodworking. He also enjoyed bowling on a weekly league. Jim loved animals and proved it time and time again by taking in strays. He took great joy in maintaining his house and could often be found outside perfecting his lawn. He was well liked in the community.

James was preceded in death by a brother William P. Robinson.

Funeral services will be held Friday at 10am in the James Wilson Funeral Home 143 Gravity Rd. Lake Ariel.

Friends may call Thursday from 5-8pm.

In lieu of flowers the family encourages memorial contributions be made to the Alzheimer’s Foundation of America, 322 Eighth Ave., 7th fl., New York, NY 10001 or by visiting www.alzfdn.org

For directions, to share a memory or to leave the family an online condolence please visitjameswilsonfuneralhome.com.