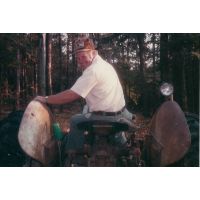 William Dale Mead, 77, of Madisonville, went to meet his Savior, Jesus Christ on Wednesday at Creekside Health and Rehabilitation Center, Carbondale following an illness. His wife was the former Diane Layland who passed away in 2007.

Born in Moscow, son of the late Harold and Margaret Davies Mead, he was a 1955 graduate of the Greene-Dreher Sterling High School, where he was involved with Future Farmers of America. Prior to retirement he had worked as a heavy equipment operator for Compton Construction and was a member of the Madisonville Christian Church.

Bill’s hobbies included driving his Ford 8-N, going for walks on the farm, flying airplanes, stopping for a coffee at Twin Rocks, taking a drive to see the sights and discover new places, eating any kind of dessert with some ice cream on top or just eating ice cream. Most of all, Bill loved the Lord and taught his children to do the same.

He was preceded in death by a brother, Quentin Mead.

Funeral services will be Monday at 11 a.m. in the Madisonville Christian Church, Route 690, Madisonville, with services by the Rev. William Graham. Friends may call Monday, from 9 to 11 a.m.