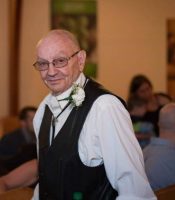 There will be no public service.

Samuel Christ, Moscow, died early Wednesday morning at home surrounded by his family.   His wife of 46 years was the former Delores “Dolly” Miller who died in 2016.

Born 1939 in South Sterling, he was the son of the late Samuel Ruben and Cora Vera Tisdale Christ and was a member of the Hemlock Grove United Methodist Church.  Prior to his retirement he worked at Reichman’s Glass Factory, Edinger Wyckoff, INC., and a custodian at South Elementary of Wallenpaupack.  He and his wife lovingly served as foster parents and he was also a lifetime member of the GDS Fair.

He was the greatest father ever!  He will be deeply missed.

He was also preceded in death by  a son, Scott VanLouvender and a sister Doris Brink.