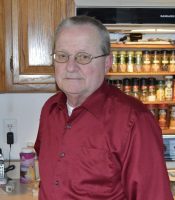 Friends may call Wednesday 12 noon until time of service.

Richard Robert Adams, 74, went to be with his Savior on Monday January 3rd after a long battle with prostate cancer. He is survived by his children Colin, Alexandra, Christian and Faith; his sister Susan Gregory and husband David; brother James and wife Cathy; sister Colleen Bibalo and husband Kevin; many nieces and nephews. He was preceded in death by his parents Juanita Adams and Frank Adams; his brother Alan Adams; a sister-in-law Helen Adams; a nephew Angelo Fontini.

Born in Stamford, CT, he grew up and graduated from New Milford High School in New Milford, CT and then attended and graduated from Cedarville University, Cedarville, OH with a BA in Business Administration, where he played varsity soccer all 4 years. After graduation he worked in all aspects of the grocery business, including management for the Foodtown and ShopRite chains. After several years in that business, he attended motorcycle mechanics school in Daytona Beach, FL graduating first in his class after which he assisted his father in opening a Suzuki dealership in Douglas, AZ where they also were involved in motorcycle racing. After a few years, Richard returned to grocery management and worked in that industry until his retirement.

Richard got his love of flying from his Uncle Richard and followed in his footsteps by getting his pilot’s license. He flew out of Sussex Airport in New Jersey and made many friends there. He loved NASCAR and was gifted the opportunity to ride in a racecar at Pocono Speedway, one of the highlights of his life.

Even though his life was a rocky road, he loved his children, his family, and his friends.

In lieu of flowers memorial contributions may be made to the American Cancer Society 190 Welles St. # 118 Forty Fort, PA 18704.

Friends may call Wednesday 12 noon until time of service.