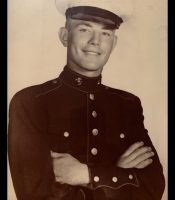 To be announced at a later date.

Richard Francis (Dick) Ryan went home to be with the Lord on Saturday, March 7, 2020 at the age of 85. He was a lifelong lover of family, sports and anything he could fix, remake or rebuild.

Born in Newark, NJ, he grew up on Alexander Street before moving, in his teenage years to Union, NJ. There he met his high school sweetheart and wife of 62 years, Patricia Hanas. They lived together in NJ where they raised their children; Laurie and Richard Jr before retiring to Lake Ariel, PA 19 years ago.

Dick was proud to be a Marine. He spent 18 months in Korea serving our country and rose to the rank of Sergeant. After returning home from Korea and completing his service with the USMC, it wasn’t long before Dick and Pat married and started their lifelong journey together.

His civilian life began at New Jersey Bell Telephone Company, which later became AT&T. Starting as an installer he worked his way through the ranks to management and retired after 33 years. Never one to sit still for long, he took a position managing the telecommunications infrastructure at Seton Hall University. He truly enjoyed the energy of a college campus.

Sports of any kind was truly his passion. He thoroughly enjoyed being involved in every aspect of youth sports coaching both baseball and football. When no longer participating as a coach, you could find him playing his own game of Senior Softball for the LA LAW team. His love of coaching lead him to coach/sponsor the Seton Hall Club Hockey team when approached by a student, even though this was a sport that he knew little about. But he learned and enjoyed.

He was a strong man with a kind heart; rising to so many challenges and facing all with such tenacity. We will always remember the stories, the jokes and the love of laughter.

Dick is survived by his wife Patricia, his children Laurie, and husband Tim Schable, Richard Jr, and wife Trish, three grandchildren, Matthew, Jesse and Nathan, sister Barbara Novak(Ryan) and many nieces and nephews.

See you around the Pool Room!