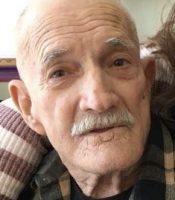 Funeral services will be held private at the convenience of the family at Saint Mary’s Cemetery, Ledgedale.

Print
Leonard S Schneider, Newfoundland, died unexpectedly on May 20th at home. His wife was the former Theresa “Terri” Carr who died October 1, 2019.
Born October 14, 1934 in New Brunswick New Jersey he was the son of Raymond and Hazel Grennan Schneider. Prior to his retirement he was employed in the manufacturing industry in Perth Amboy New Jersey.
Also surviving are daughters: Betty, Jennie and husband Tim, Pamela, sons: Eddie, Jerry, Lenny, and the late Leonard Sr. Many grandchildren, and great grandchildren.
He was also preceded in death by sisters Hazel, Marie, Margaret, and Elvera as well as brothers Earl, and Raymond.
Funeral services will be held private at the convenience of the family at Saint Mary’s Cemetery, Ledgedale.