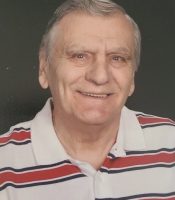 A Funeral service and interment will be private at the convenience of the family.

Kenneth F. Hoover, 83 of Hamlin, died Saturday morning at Linwood Nursing and Rehabilitation Center in Scranton. He was the husband of Glenda Swingle Hoover. The couple would have been married 61 years on July 30th.

Born in Moscow, he was the son of the late James and Christina Emerson Hoover. He was employed as a truck driver for Morwall Trucking, Daleville, for many years. Prior to his retirement he was employed by Liz Claiborne Warehousing.

Ken enjoyed camping, traveling, and was an avid bowler. He was also a member of the Odd Fellows.

He was preceded in death by a brother Jim Hoover.

A Funeral service and interment will be private at the convenience of the family.

To leave an online condolence please visit the funeral home website at www.jameswilsonfuneralhome.com.