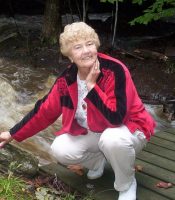 In lieu of a memorial service at this time, donations can be made to plant a tree in her name at A Living Tribute. Address for the Commemorative card is: Kathy Sollenne, 1043 Silver Spring Road, Lake Ariel, PA 18436.

Due to the current health crisis, services may be held at a later date.

Kathy Ortiz (born as Kathe) of Lake Ariel, Pennsylvania, passed away on December 24, 2020, just 3 days after her 86th Birthday. She was preceded in death by her parents, Johan Vögeli & Freida Gerber-Vögeli of Switzerland, her sister, Doris Kofmel-Vögeli of Switzerland and her second husband, Marco Fidel Jaramillo of Miami, Florida.

When she turned 18 years old, she decided to visit America. She had a round trip fare on the SS Ile De France and arrived in America on November 9, 1954. Shortly after, she turned in her return ticket and decided to make her life here. Her first job was in a Manhattan coffee shop by the Radio City Music Hall. It was very exciting for her because working there she had the chance to meet many famous actors.

She Married Marco Fidel Jaramillo in 1965 and gave birth to her daughter Kathy, in Astoria, Queens, NY. They moved to Levittown, NY, where shortly after she was divorced.  She raised her daughter on her own while taking on 3 jobs to support the two of them and keep the house. She was a proud, strong, and independent woman. She raised her daughter to be the same and instilled in her the value of life as well as the knowledge of speaking 4 languages. She always said, we should teach our children to be bi-lingual because you never know how that can help them.

She worked for Sydney Gould Co., LTD in New Hyde Park, NY, as an Office Manager and Bookkeeper from the late 70’s through most of the 80’s. She later retired from E.L. Tool & Die Co., Manhattan, NY after 20+ years. In 2000 she moved to Lake Ariel, Pennsylvania with her daughter and her family.

Through both jobs she met so many wonderful people from all walks of life. She opened her home to people from other countries who later became like family. She enjoyed helping them and giving them opportunities that she had. She traveled the world, visiting many countries including Italy, Germany, France, England & Guatemala to name a few.

Three years ago, she started her struggle with Dementia and her heart, so her new home became Julia Ribaudo Extended Care. She kept the nurses on their toes as they all quickly got to know her feistiness. If she did not want to do something or eat something, they knew it was not going to happen. When it was time to do something, they would have to go looking for her because she was always off in her wheelchair roaming around.  Her favorite nurse was Patty, because she would always speak Spanish with her, and she had a special way with her.

Kathy was a beautiful woman both inside and out, and she had a wonderful smile. She loved life! She could party with the best of them, and she did! She enjoyed being around others, traveling, and sharing stories of everywhere she has been. She loved being in Manhattan and would visit there any chance she had. She loved cats and always had one. She also enjoyed going to the Casinos to play the coin slots. She was a feisty woman right up till the day she passed. She was lovingly called “Boss Lady” and that name suited her because when you were in her care, it was her way and no arguing back! She loved her grandchildren, Tabitha & Justin. They were the world to her. She never missed a school recital, a dance show, or a swim meet. She babysat them after school and would greet them from the bus with cookies and chocolate milk and that was their secret. She gave them her heart and in return they were her true happiness.

We will miss her greatly. Her favorite catch phrase “C’est la vie” and “onky donky phunking monkey” will be remembered as we picture her saying it with her accent. Oh that accent, priceless.

In lieu of a memorial service at this time, donations can be made to plant a tree in her name at A Living Tribute. Address for the Commemorative card is: Kathy Sollenne, 1043 Silver Spring Road, Lake Ariel, PA 18436.

Due to the current health crisis, services may be held at a later date.

To send the family an online condolence please visit www.jameswilsonfuneralhome.com