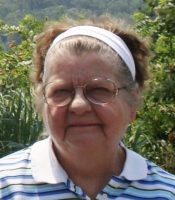 A memorial service will be announced at a later date.

Julia McKay Graham, 83, of Lakeville, died January 28 th at Wayne
Woodlands Manor in Waymart. She was the wife of Alexander J.
Graham; the couple had been married for 56 years.

Born in Montreal QC, she was the daughter of the late Daniel McKay
Loomis and Marjorie Ellis Loomis.

Julia had a passion for all aspects of art including wood cuts, fine art,
knitting and crocheting, and latch hook rug making. She studied oil
painting under Bill Alexander. Julia was a member of the Another
World Mini Club, making miniature dolls from her own designed molds.
Julia enjoyed teaching arts and crafts conducting classes in oil painting,
doll making and other crafts from her time serving as a Cub Scout Den
Mother to leading classes for miniature groups. Julia was president of
the South Jersey Orchid Society and created some of her own hybrid
Orchid species and African Violets.

She enjoyed baking, cooking, and dinners on the beach with friends.

She was preceded in death by two brothers Dan Gordon and Frederick
Loomis.

A memorial service will be announced at a later date.