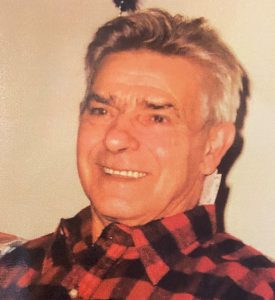 Friends and family may call Monday, November 29 from 4 to 6pm.

Joseph J. Dovin, Lake Ariel, died Tuesday afternoon at home surrounded by his family following an illness.  His wife was the former Caroline Gadomski.  She died April 10, 2013 and the couple had just celebrated their 68th wedding anniversary that February.

Born in Olyphant, son of the late Andrew and Mary Gdovin, he took over the family dairy farm when he was fourteen years old. He later worked construction on the side in addition to running the farm. He was a hard-working and kind man who was a devoted husband, father, grandfather, son, and uncle. He liked hunting, fishing, and spending time with his friends and family, especially his grandson. Later in life he enjoyed going on family vacations.

Surviving are daughters Jayne Dovin of Lake Ariel and Joanne Shafer of Havertown; a grandson, Michael Shafer; as well as several nieces and nephews.

He was preceded in death by a sister Mary Altemier and toddler brothers, Andrew, Steven, and Valentine.

Friends and family may call Monday, November 29 from 4 to 6pm.

The family would like to thank Charlene and the entire WMH Home Health and Hospice team for their care.