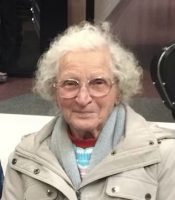 Helen M. Lamberton, 94, Lake Ariel, died Tuesday in the Geisinger Community Medical Center after being stricken ill at home.   She was the wife of William L. Lamberton who died in 2016.  At the time of his passing the couple had been married for 70 years.

Born 1927 in Seeleyville, she was the daughter of the late Paul and Margaret Woodword Horst. Helen had been employed for many years by Katz Manufacturing in Honesdale and also worked alongside her family on the Lamberton family farm.   Helen was very independent, living in her home by herself and taking care of the daily chores until the time of her passing.

She was also preceded in death by her sons Gary, Randy and Rodger Lamberton; her son in law Carl Dolph.

Interment and services will be held private and at the convenience of the family.