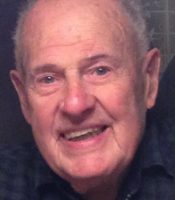 Finally, please join the family in a Jameson toast to the master, Charles Lawlor, whose life must be celebrated.

Charles Lawlor, The Hideout, Lake Ariel, passed into the arms of his recently deceased wife Patricia on Thursday, June 6.

Born in Limerick, Ireland, to William and Molly Callahan Lawlor, Charles was one of twelve children. As a young man, he loved soccer and service. He proudly registered for the British Royal Army, and served across North Africa and Europe where he learned several different languages. At the conclusion of WWII, Charles brought his talents to America.

Charles volunteered and served honorably in the United States Army, and after the Korean War, he established himself in Manhattan and Queens, New York. He played semi-pro soccer in Harlem, and he never let his family forget that soccer was the world’s greatest game.
He supported his wife Patricia and four daughters, Cathleen, Eileen, Patti, and Elizabeth, with a career defined by service. He worked for the NYC transit authority, the Long Island Railroad, and the NYC Department of Sanitation. He knew every inch of Manhattan and every stop on the subway. He finally retired from Morgan Guarantee and Trust and relocated with his wife to Lake Ariel, Pennsylvania.

Charles was the baby whisperer of the family. Cheek to cheek, softly singing “Danny Boy,” he comforted his grandchildren with his strength and beautiful voice. He was also a people whisper. Charles regaled family, friends, and nearly anyone who would listen with stories from the old country and the new country. Wherever he was, he held court with a Guinness in hand and a story in mind…and we loved it.

Charles was an inspiration to many. He served fellow Hideout neighbors as one who would take those who could not drive to medical appointments and to the hospital. He was honored to serve his community especially on Veterans Day and Memorial Day, when he would place “a thousand” flags in remembrance of those who served his beloved America; they were his heroes. Recently, he was honored and embraced by veterans, family, and friends at the Hideout’s Veterans Day Celebration. He humbly accepted their tribute.

The Lawlor family extends its gratitude to the Traditional hospice nurses especially Mary Carol and Kolton. The family expresses its deep appreciation to Melissa who lovingly cared for Patricia and Charles, helped the family, and became a friend.

Finally, please join the family in a Jameson toast to the master, Charles Lawlor, whose life must be celebrated.